I am baffled as to why after 10 years of trying to bring a high barrier to entry product into a test market in either Canada or the United States no major manufacturer is interested in a truly ownable segment of salty snacking.  The opportunity was to at very low cost $20-50K) to conduct a test market to confirm the strong consumer research projection of $20M in Canadian sales.  Upon confirmation at co-manufactured margins, begin a National rollout, followed by an even more profitable move into self-manufacturing in any North American location of choice. 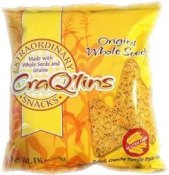 Peter Hunchuck spent the majority of his career making or overseeing the development of 60 sku’s each and every year for Nabisco/Christie/Kraft for 20 years.  He has had 3 huge successes, 2 of which resulted in over $120M in annual sales in North America, triple the research projections.

He in 3 days created a unique Salty Snack formulation not just for Gluten Free and Low Fat audiences, but for everyone, as there was shockingly no compromise on TASTE.  It is just happenstance that it is also particularly suited for these 2 specialty segments, given the unabashed appeal in the broader snack market.

Add to that the ability to lock out the competition through LIMITED manufacturing resources (just a single manufacturing site in N.A.), making this a destination purchase is every manufacturers dream.

In exchange for developing this formulation/product, he retained the exclusive North American rights from the independent offshore manufacturer (with full international certifications) with whom he created this product.

Having created a finished product which vastly exceeded the IPSOS Pre-Bases concept, (projecting a $20M business in Canada in just 70% National distribution) it would significantly surpass the 10 times rule in the United States.  So you can imagine how shocked we were when the company who conducted the Pre-basis research elected not to proceed (due to a strategic shift).

Together we spent the next 10 years presenting the opportunity to virtually every significant CPG in North America.  Every single one agreed how great the product is, through the actions of their hands returning to the bag to eat more (leaving no crumbs behind).  But they all said no, as they did not create it (NIH syndrome, something Peter experienced at Nabisco where he exposed his marketing team Quaker Rice Cakes/before it was taken to Quaker and became as big as it is today).

So with all of these rejections and more, we wondered if a Gofundme campaign tied to the Celiac community and engaging them as distributors might be a successful alternative.  But with the low selling price, it did not seem to be a financially viable option.  How does one cost-effectively distribute a $25/case filled with 16-50g bags?

We even attempted a small test market in the U.S., using the packaging seen here, but the distributor completely lacked the expertise to bring this to market, which confirmed the adage if it walks and quacks like a duck, guess what, it is one.

What am I missing?  No such product exists in Canada or the United States even 10 years later.  It is truly the ONLY great tasting Gluten Free item you will every try.  It is as crunchy as a rice cracker, but tastes like a restaurant quality tortilla chip.  It can even be shaped to be a truly healthy (low fat) Goldfish alternative for children.

This formulation has been selling in the country of manufacture since 2009, proving the longevity of consumer demand.  The product is more relevant today for families looking to eat better and find snacks that they can enjoy and not worry or wonder about.

The ingredient line is so clean it squeaks!  So help me understand why can we not get it launched?