Now that you have something that people want and a USP which clearly communicates what your key (and most important) difference is, you now need to tell your target group (those most likely to buy), about it.

Not telling consumers where you are and what they can get from you is the second time you “forgot to put bait on your hook when going fishing.  It is also why they do not call it catching!”.

So start the conversation!  What better way than to use intrigue!

We already know that being all things to all people, is a perfect recipe for disaster and possibly failure, because it always prevents you from working smart first.

If you are everything… then you are nothing!

ADVERTISING NEED NOT BE EXPENSIVE

It is not and it does not have to be digital (simply an advertising medium that may work for some business and not for others).

So let’s begin with this local retailer…. not in the big city, but almost a world away in Costa Rica for an excellent example of effective advertising….. at its simplest.

As you have begun to travel up to Lake Arenal and Volcano Arenal, in the northern province of Guanacaste, there is a single road up from Liberia.  During your drive you have already encountered the two signs (above) made with materials found all around the countryside (metal corrugate) and bright and consistent colors to communicate different messages.

Toad Hall was well aware of that and set about to make their restaurant and boutique hotel not just a stop for lunch, but rather a destination.

Potential customers who have just spent 90 minutes on the road towards Lake Arenal and are looking for a scenic vantage point of man made Lake Arenal and a cold one, or snack. But they have been in conversation with this destination unknowingly during the trip.

After you have seen 6-8 of these they have:

Definitely not CLIO award-winning, but they began a simple, meaningful conversation.

The 80-20 rule (80% of your business coming from 20% of your customers) does not work for tourism.  So a business has to talk using innovative/unique advertising/messaging to make them thirsty, feel that the best guacamole in the country is worth tasting while taking in the spectacular sights.

NEVER assume people know who/where you are, even in a small town.  People are constantly moving in and out.

A food purveyor has 1 extra shot in the cannon, one which may never be seen!

While growing up in the early 60’s, a restaurant on the way to our cottage did so. The burger/fries joint was so successful it subsequently spawned a sizeable furniture empire.  They determined if they did not get you with the same roadside conversation ad heading up to the cottage, after you passed they tortured you with the heavenly smell from their exhaust fans.

Using this same addictive smell of fresh cooked burgers and fries in Orillia Ontario was Weber’s burgers on Highway 11.  After opening up in 1973 just north of Orillia Ontario it faced a huge problem in 1981 when the provincial government of Ontario installed a chain-link fence, above the previously installed, but ineffective box-beam barrier, to curtail the tens of thousands of people who on their return visit after the weekend were crossing over the highway barrier to reach that smell on their drive home from the cottage on Sunday night!

In 1983 Webers acquired a pedestrian bridge from the CN Tower in Toronto for $250,000.  For a small seasonal roadside burger joint, this was not insignificant!  This became the first and only privately owned bridge built over a public highway in the Province of Ontario.

This generated even bigger line-ups moving 8,000 burgers on a typical Friday, so imagine how little it took to pay off the bridge with Sunday traffic!  The only advertising was the aroma. 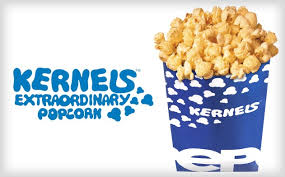 station/apartment/business complex in Toronto, where I quickly embraced the importance of smell.  A few weeks after opening I placed a huge, industrial-size fan blowing both the fresh, coconut oil popped corn, along with the sugar sweet varietal flavors to potential passing customers. Success? Yes! In year one ours was a top 5 store (in a chain of 250 locations). It was effective and FREE advertising for the price of a fan.

BUT note NEVER a nude logo…..always with the USP.  Kernels still use my USP 30 years later.  Two unique words designed to avoid confusion and position the products’ superiority.

1 thought on “From Orillia to Costa Rica ONLY Advertising can truly grow..”